ENGLAND  Hadrian’s Wall  – I’m a purist trekker when it comes to walking long-distance designated trails, insisting that they be step-by-step odysseys completed in one go with no skipping of sections deemed to be of lesser interest. Take my treks in England. I’ve dipped my boots in the Irish Sea at St. Bees Head and 200-plus miles later dipped them again in the North Sea at Robins’ Hood Bay – Coast to Coast Walk completed. I’ve walked every step of the South Downs Way in the country’s south and followed the Thames’ 185 miles of twists and turns from its source in a Gloucestershire meadow to where the river empties into the sea beyond London.

And then there was Hadrian’s Wall Path National Trail that stretches its way east to west across northern England between the Irish and North Seas.

In the summer of 2005, I pulled into Steel Rigg car park to walk a chunk of the wall that lies within the boundaries of the Northumberland National Park. 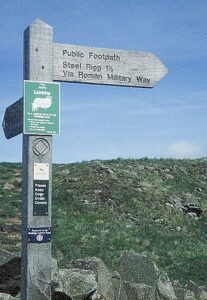 Park ranger Page Lazzari was waiting to meet me. Together we’d walk the section “backwards,” west to east  – contrary to the direction guides to the path are written – so as to have the wind at our backs. With but one afternoon at my disposal, Lazzari had suggested this particular portion of the Trail as the best place to imagine what the wall was like at the time of the Romans AD122.

Steep rises and falls in the terrain gave our legs a workout as we followed the wall of tightly fitted gray stones. Stone steps eased the way to top-of-the-world views, with Scotland but three miles distant. At one high point we looked straight down into lovely Crag Lough where a pair of swans drifted over the still water.  It was there that I vowed to return some day and walk the whole thing. 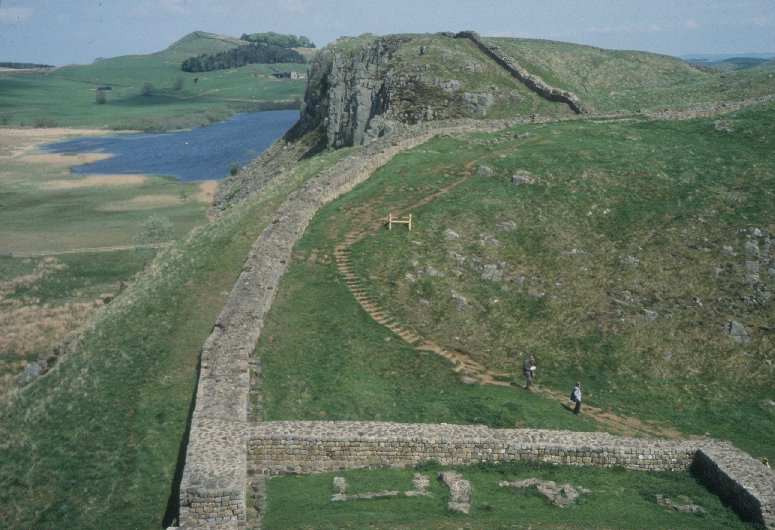 The most intact parts of the trail lie in its most remote sections.

In March of this year, I did just that. Virtually.

The Conqueror Virtual Challenges  made it possible, a website I stumbled across while poking about the internet. A dozen or so challenges were offered. Among them I could swim the English Channel, walk the Inca Trail or the Ring of Kerry, climb Mt. Everest or Mt. Fuji, tread the entire length of Route 66 or – and here I stopped dead in my tracks – walk Hadrian’s Wall Path National Trail. All I need do was pay $30 for the experience, download the app to my phone and tuck my Fitbit step-tracker in my pocket.

Five miles a day has long been my regular Fitbit goal. Given that, I figured I could easily walk the length of the wall, 84 miles, in 17 days. Tying up my walking shoes, on the first day I set forth, virtually, from the town of Wallsend on the edge of the North Sea by walking the paths of a golf course near my home before the early-morning golfers arrived.

Each day’s progress showed up on my cellphone – a map showing me as a teardrop shape initialed YH in the company of initialized others on the path with me.  My teardrop carried the American flag. A few others designated their country of origin, with most teardrops opting for “Citizen of the World.”

A tap on my phone allowed me to view terrain, street, and satellite views of where I’d ended up that day. Day one found me at Heddon-on-the Wall with a street view that appeared to be a back-alley set of steps lined with garbage bins.

For three days my path followed B6318, a secondary road with sweeping satellite views of bucolic countryside and picturesque villages but without a glimpse of anything resembling the wall.  Not unexpected, as Page Lazzari had spoken of it.

While natural deterioration can be credited for some of the wall’s tumbling away, large pieces were taken as a ready supply of building material after the Romans’ departure. As Lazzari explained as we walked along, “Why bother starting from scratch at the quarry when plentiful handcrafted stones were right under your nose?” That was especially so in the lowlands where carting off was easily accomplished, entire buildings from farmhouses to churches were constructed of “recycled” wall.

In 1753, with total disregard for history a military road – now known as B6318 – took over quite a long section of the wall. “An act of official vandalism,” Lazzari called it. One that did, however, arouse the start of a conservation movement, a movement that took a mere 350 years before the wall, a designated World Heritage Site, became a protected long-distance footpath. 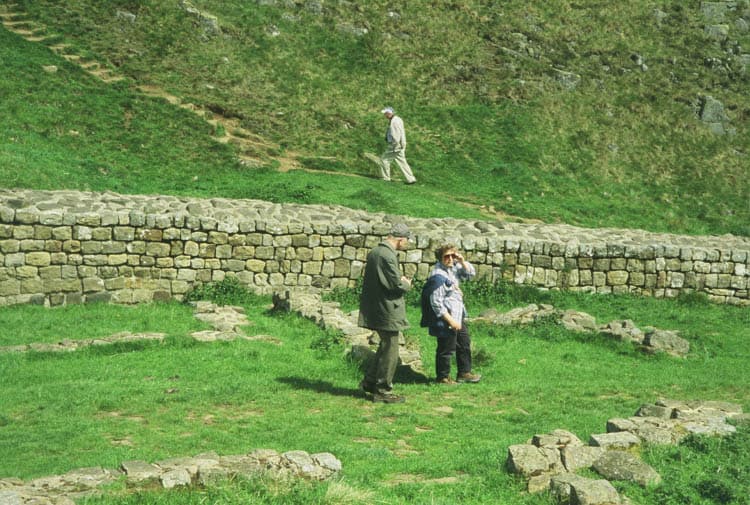 Walkers pause to look at the views from the highest part of the intact path.

Postcards arrived from me …

From time to time a digital postcard arrived in an email  – from me, to me.  The first one let me know how delighted I was with a stop for tea, one complete with scones, clotted cream, and strawberry preserves.

I hoped that there were such stops for tea in 1801 when William Hutton, 78 years old and hailing from Birmingham, walked the walls length, turned around and walked it back again. And then sat down to write a lively account of his trek. Historians immediately groused that while his account was lively he got a lot of stuff wrong.

“A lot of trekkers still get it wrong,” Lazzari had commented. Contrary to that often supposed, the primary purpose of the wall – 12 feet high and 10 feet at its base – was not to keep people out. Instead, it was an invaluable tool for controlling the market and the economy. Fortified gates, “milecastles,” were placed at every mile, allowing the passage of people and regulation of trade north and south. When “barbaric” clans from the north acted up, Rome’s legions, representing “the superior civilization from the south,” marched through the gates to let them know what was what and give them a good smacking. 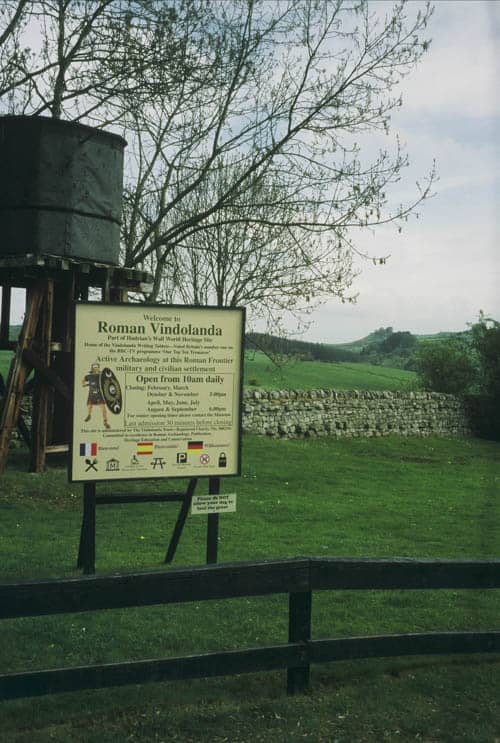 Vindolando, one of  a dozen forts placed at seven-mile intervals to support and service the wall.

While the Conquerors Challenge followed the path as a purist walker would, entertaining no deviations from the main route so as to track an accurate start-to-finish trek, emailed essays arrived describing nearby sites relevant to the path. Vindolando, a Roman fort located one mile south of the wall that my ranger companion had encouraged me to visit, was one of them.

Vindolando was one of a dozen forts roughly placed at seven-mile intervals to protect the wall. Since 1970, archaeological excavation has been ongoing with no end in sight revealing officers’ residences, temples, bathhouse and latrine facilities with flushing water, along with the civilian settlement that grew up around the fortress to provide services.

Materials of all kinds emerged, much documenting everyday life – shoes, pots and glassware, a ladies wig, a cat caught in a floor heating system – were displayed in a museum along with a host of other unearthed objects. 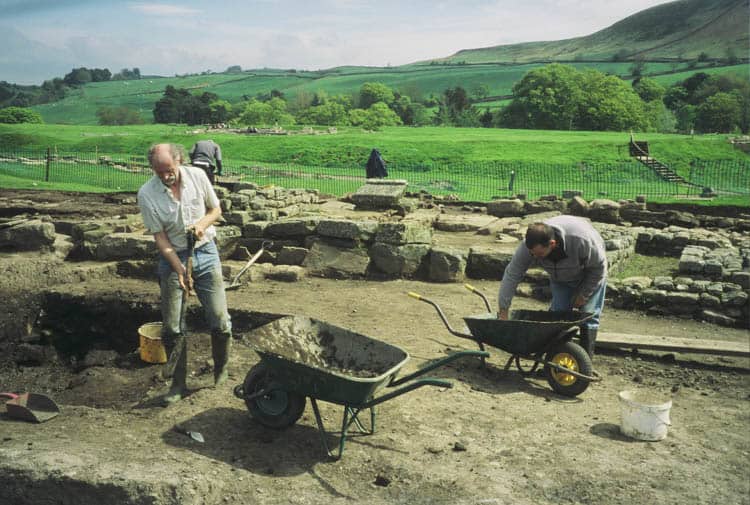 Archaeological excavation along the wall began in the 1970s and continues today.

During my virtual walk –  as I read the from-me-to-me postcards that arrived in my mailbox –  I recalled seeing the Romans’ equivalent to such correspondence. On view in the Vindolando museum were replicas written on the stationery of the day, thin sheets of wood found preserved in the aerobic soil. (The British Museum, where the originals are housed, considers them among its top treasures.)

Expecting ancient correspondence of the “Hail Caesar” sort, I was charmed by their quite ordinary content: Thank you letters –“Through your kindness we are able to celebrate the holidays more splendidly”;  explanations –“I would have fetched the ox hides but the roads are bad”; along with complaints about the local population, the Brittunculi, the wretched Britons.

I’d hoped to see satellite  “terrain” or “street views” of the portion of the wall I’d visited  with Page Lazzari, perhaps even of Vindolando, when my virtual walk passed through. Instead, most likely due to their remote and unpopulated locations on the trail,  I sadly was greeted with “not available.” 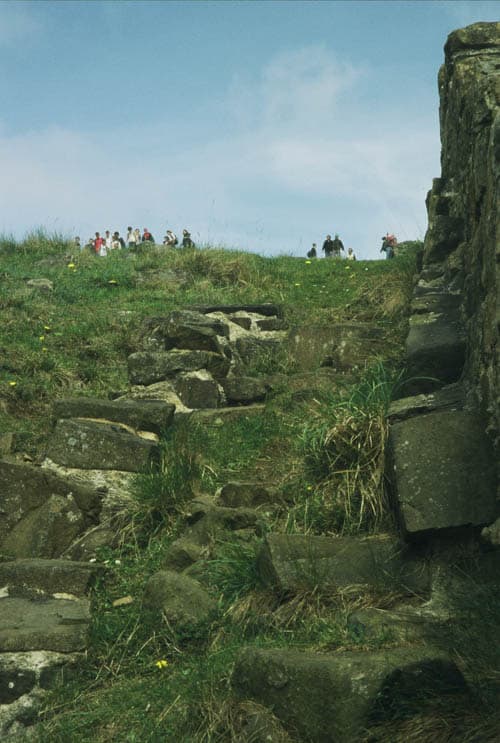 Rough stone steps flank the wall; walking on its top is strictly off limits.

So it was that I ended my virtual Hadrian’s Wall walk without seeing even a stone of the wall, but with a renewed appreciation of what I had seen and experienced years ago.

On day 17 of the Challenge, the map on my cellphone showed that my YH initialed tear-drop shape had reached Bowness-on-Solway, the end of the National Trail.  A cheery message of congratulations on my accomplishment arrived. A medal would soon be coming in the non-virtual mail.

It came, weighing in at a hefty one-third pound, its packaging emblazoned with the motto, “Virtually Anything is Possible.”